Neal Palmer‘s latest body of work will be exhibited in his upcoming November show, On Track.

What is this big beautiful painting? (featured in above image)
Tane Moana (Te Araroa) is a 4 panel piece, a tad shy of 2m sq.  It’s an image of the largest Kauri on Northland’s east coast. The tree’s name is Tane Moana and it’s on the Te Araroa track near Tutukaka. There is a boardwalk right up to the bottom of the trunk which gives you a great sense of the volume and scale of this significant totem.

What is the largest painting you have made?
I’ve painted several sizable works over the last 20 years, a couple of flax leaf pieces approaching 4m wide and over a meter high. I often use multiple panels to achieve large scale as in this harakeke work pictured with the then Prime Minister (Helen Clark) at an event in 2006. My latest four panel work is of Tane Moana, the largest Kauri on Northland’s east coast. I have a horse fetish and have painted one I particularly liked, slightly larger than life, also in 4 panels. I worked as a mural painter and commercial gilder in the 90s so have worked on a much larger scale, though these are separate from my contemporary body of work. 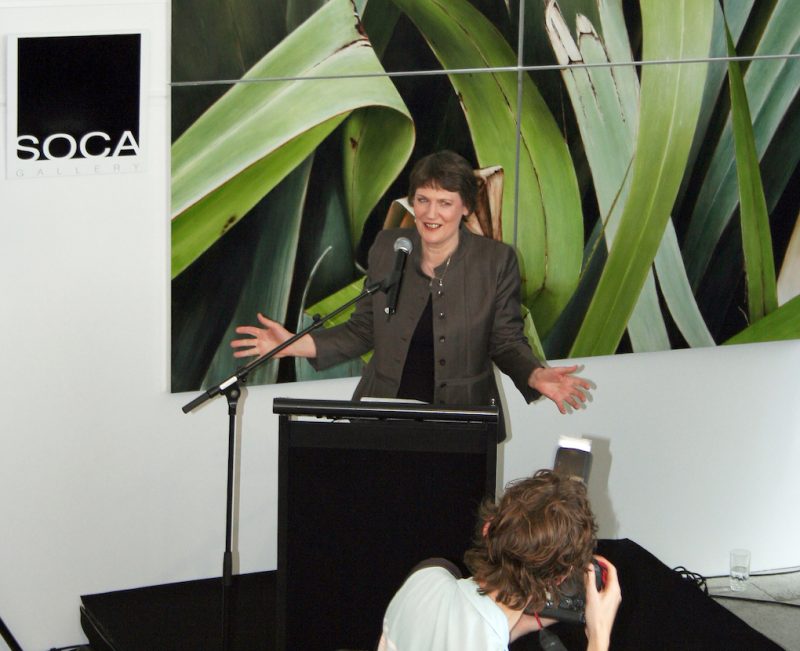 Who are your artistic hero’s and influences?
Many and varied! I find enjoyment and appreciate all work of quality whether that lies in concept, artistic skill or just plain old magical X factors. At art school I ended up in the sculpture department, I loved Richard Long and Andy Goldsworthy, I was particularly interested in ideas around traveling and responses to the environment. I’ve also always had a major love of the St Ives School, it was their work abstracting images and forms in direct response to the Cornish landscape that informed my early ideas. Barbara Hepworth’s studio and garden is still one of my favourite places on this planet. These ideas are still influencing my work, though they manifest very differently these days. Another frequently visited early influence is the entire Sainsbury Wing at the National Gallery in London, an amazing collection of works of the Renaissance era. I also love Op and Pop artists like Bridget Riley and Robert Rauschenberg. I think my overall aesthetic preference is for punchy images with strong geometric structure, either obvious or underlying.

It was really interesting coming to NZ not knowing anything about artists here. I think so much of this country’s art is rooted in the land one way or another, I felt an instant connection even before it became my home. Initial favourites were Judy Millar, Ralph Hotere, Gordon Walters, Allan Maddox, Richard Killeen, Lisa Reihana and since living here so many great artists I have come to love and respect.

Your work has an abstract quality, is this intentional?Yes, I really enjoy looking at geometric abstract painting and try to use similar forms in creating my work. I use a lot of triangulation and grids as underlying structural compositions. I’m interested in repeating patterns through scale, and often try to make the viewer aware of the flatness of the surface of the painting, also awareness of the edges of the work through cropped images. 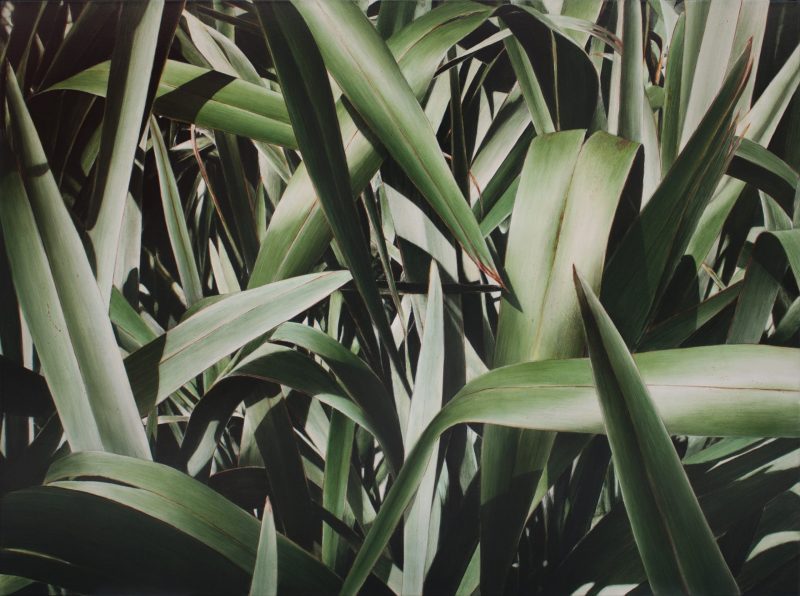 How important is scale to your work?
I find scale very interesting, my work varies in scale from 100mm squares to large multi-panel works the largest of which is nearly 4 meters wide. Scale absolutely changes the way a viewer experiences a work emotionally, in the same way we experience viewing a Kauri as opposed to a tiny alpine flower. There’s awe with large scale and a jewel-like quality with small scale. I do like to play with these experiences, sometimes subverting them, but generally playing along with classic expectations.

What do you like?
Sex and drugs and rock & roll

Most memorable artwork/s you have seen in person?
Lisa Reihana’s ‘In Pursuit of Venus (Infected)’ is hands down the best artwork I’ve seen in recent years, perhaps the best artwork ever produced in NZ?  I’m biased, having known Lisa since the early nineties. We were flatmates in a converted warehouse on K’Road, though I honestly do believe it’s the most significant artwork of our generation. I think a personal connection always enhances an appreciation of an artist’s work; previously I may have answered this question with a work I saw at the Royal Academy of Arts in 2000 by Tim Noble and Sue Webster who were a year ahead of me at art school and became part of the Young British Artists movement. The work was a massive pile of rubbish with a strong light casting a shadow that created a beautiful portrait of the artists drinking champagne. It was an image that stuck with me for years.

What’s your process?
The process starts while I’m out and about running/walking around the motu, I’m constantly looking for the forms and textures that resonate with me. My work is about creating a body of work that is a direct response to the world around us with a particular interest in botanical form but not exclusively. I revisit these places with my camera and often collect leaves and petals etc. for closer study in the studio. Photography is an important element in my work, I’m interested in the editing process inherent in taking pictures and the language of photography. I then work through these images to figure out how they relate to my painterly ideas; I want to create work that somehow straddles the visual languages of photography and painting, not trying to be photorealist as such, more that it makes you think about the relationship between reality and representation. Then with the painting part of my process, it’s all about the mark-making and (keeping the above in mind) making images that engage the viewer with the pure enjoyment of paint. The themes I’m interested in exploring are representing the cyclical nature of life, fractal forms repeating through scale, the push and pull of a painting’s actual surface and the illusionary space of an image. I am deeply concerned about environmental issues like deforestation and more generally our overall relationship with the botanical world.

How do you achieve such fine detail?
Small brushes, ha-ha! Actually, I use a large variety of techniques and tools to achieve the detail. It’s all about the mark-making, I’ve developed these over the years and am continuously finding more ways to represent the textures and surface patterns of the botanic forms I work with. 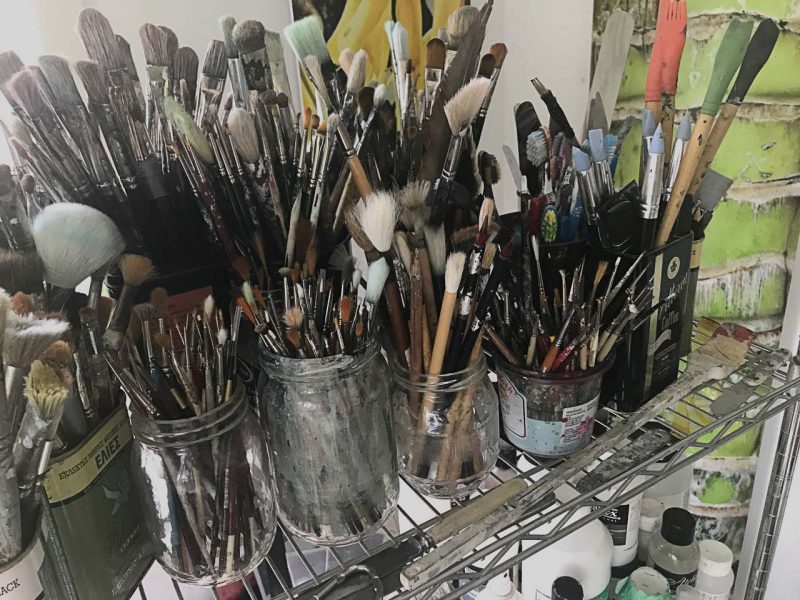 Most noble NZ native plant?
Most noble is easily the Kauri tree, born of the gods! Though my personal favourite is the Harakeke plant, it lends itself perfectly to my ideas of geometric structural composition buried in representative painterly environmental response. Also, it has mana through historic cultural and practical usefulness.

Do you work from photographs?
Yes I love photography, my process starts with taking photographs and the paintings are intentionally trying to blur the distinction between photographic and painterly images.

Petals or leaves?
The work in my latest show includes a couple of Kauri leaf works which I haven’t painted before so I’m very interested in how these are received.

If you could only have a single painting instrument what would it be?
That‘s a very difficult question to answer. I use a large variety of tools to make the marks in my works. If I had to choose I’d probably go for a large calligraphy brush with a very fine tip, to cover large areas yet have the ability to add fine detail.

Which other artists do you admire (locally and internationally)?
I’m a big fan of Judy Millar, though to be honest there are so many great artists that I find inspiration from it’s difficult to list them. I’ve had conversations with other artists over the years and some avoid looking at other art to reduce confusion, personally, I love all sorts of different work for different reasons and regularly visit the local dealers to keep abreast of what’s happening here. If I could step into the shoes of an artist I admire it would be a cross between Richard Long, Andy Goldsworthy and Peter Lanyon. The great NZ artists I admire are Lisa Reihana, Ralph Hotere, Gordon Walters, Allan Maddox and I’m also a fan of Garry Currin, but again to start listing artists would be a very long list indeed!

How has Covid affected/influenced your practice?
I’m very lucky to have a studio at home, so my day-to-day has only been changed slightly. More family members at home has been nice, and there seems to have been an increased interest in art with people spending so much time at home. The lockdowns have been progressively harder but again I’ve been lucky with timing for shows falling between them. For this show, I’ve explored ideas around walking bush tracks like the Hillary Trail, which is work I started while on a residency in Karekare in 2018. So maybe there’s a bit of displaced desire to get back out and about the country exploring those remote wildness environments 😉

Morning, evening or all day long?
I generally work normal daily hours but because I have a studio at home this can get a little disrupted as and when needs be.

What’s your studio soundtrack?
I have a pretty eclectic taste in music. While I like a bit of Vivaldi every now and then, I tend to listen to fairly dance-y tracks. I’ve had Lee Scratch Perry oh high rotation for a while, so it was sad to hear he’d died recently. Ska, dub and electronica are my go to, but indie pop/punk features largely too. I often listen to National Radio in the mornings and I like science/history themed podcasts.

How would you describe your work?
I try to make work that is relatable but that slips between easily defined genres. How about; contemporary botanical photorealist painting.

Best shade of green?
I use a lot of Phthalocyanine Green it’s pretty intense so you don’t need to use much when mixing colours, I also love Green Gold it’s such a warm green. I tend to stay away from the opaque pigments as they can kill the depth I like to achieve.

How long have you been painting for?
To be honest, since I can remember! It was my go to activity as a kid, and I studied it all the way to degree level. I worked as a set-painter/propmaker post art school then a decorative muralist and commercial gilder before getting back to my own paintings in the late ’90s. I’ve been a full time exhibiting artist since my first show in 1998.

When you’re not painting and dancing what’re you doing?
Painting and dancing take up most of my time. A big part of my work involves getting out and exploring the tracks, trails and streets around the motu (when it’s possible). I’m a keen runner and have a group of mates who I go on various adventures with. My mental prep for a day’s painting often involves a wee spell in the garden pottering around, we have recently had a raised veggie garden built which takes a bit of time to manage. I also enjoy cooking – my current go to dish is curried veggies from the garden.