Föenander Galleries is proud to present Roger Mortimer’s first exhibition of new work in Auckland since 2012. Houhora comprises of six new paintings, as well as the debut of a large tapestry (Houhora) which covers the Northland coasts, from Matauri Bay to Cape Reinga.  Mortimer has been aptly described as ‘a contemporary visual mythologist’[1] and is widely recognised for his distinctive use of medieval imagery on early maps of Aotearoa New Zealand.  His work gives a post-modern and post-colonial take on the charting of the coast line.

Mortimer’s most recent work draws specifically from the 14th-century epic Dante’s Divine Comedy, in which the author journeys deep into the nine circles of hell, and re-emerges through purgatory and on to heaven.  Graphic imagery lifted from illustrated medieval manuscripts is set against a familiar backdrop of local nautical charts, which guide us – with their markings and warnings – through Mortimer’s enigmatic and fantastical landscapes.  Troubled figures, tortured souls and mythical creatures populate these dreamlike spaces, re-enacting the humour and horror of Dante’s well-formed concepts.  Much like the poem itself, Mortimer’s paintings are cloaked in symbolism and metaphor which reflect the universal struggle of the human condition, and hope of redemption.  Mortimer’s local presentation and re-shaping of these concepts, speak to the socio-political issues of this land, and to a growing sense of global unease.

Scaling the gallery wall at close to two metres, Houhora is the phenomenal project Mortimer has been working on for the last year.  The tapestry is a first of its kind for the artist and a natural progression of his practice.  Mortimer’s elegant hand, signature palette and inky washes are masterfully translated into the surface of the woven threads, making reference to his painting practice. Yet, Mortimer’s mythmaking here is transformed by the materiality of its medium his figures now literally woven into their setting, appear as theatrical tableau, whose compelling stories address the warp and weft of our present realities.

It is notable across these new works that a number of the compasses, landmarks and figures which inhabit Mortimer’s maps are cropped by the edge of the frame (where they have previously been contained).  Figures, events and narrative now extend out from the canvas, as if to suggest these locally grounded scenes are part of a much larger story, which can’t be viewed from a single perspective or any one moment in time.  Mortimer’s paintings resonate widely, presenting imagery, themes and ideas with a universal significance, whilst expressing the inescapable desire for a better future.

Roger Mortimer graduated from the Elam School of Fine Arts in 1999.  He was the Paramount Award Winner of the prestigious Wallace Art awards in 2014, and in 2017, a survey exhibition of his work, ‘Dilemma Hill’, was shown in public galleries across Auckland & Wellington. His paintings feature in a range of significant public, private & corporate collections across New Zealand, Australia, Europe and Asia. 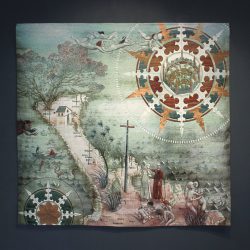 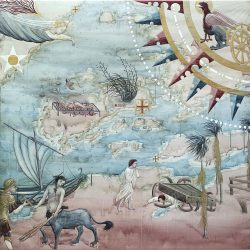 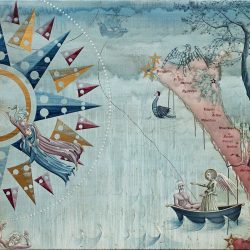 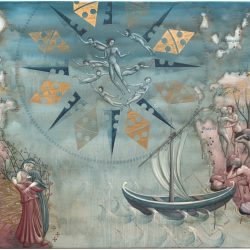 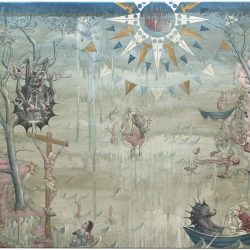