Katherine Simpson and Freeman White‘s combined exhibition of New Work sees both artists exploring their respective environments and concepts of ‘the land’. Freeman’s lush, vibrant rolling hills which give the illusion of eternality are contrasted by Katherine’s, cool angular rhythms which depict a landscape in constant flux.

Katherine Simpson’s interest in urban and rural landscape is the source of constant free movement and deconstruction. Her focus on deconstruction stems largely from the breakdown of the physical environment. Just as the physical landscape around us is constantly built up and transformed to the point where the original elements are distorted or lost, so are Simpson’s paintings. Simpson utilises this same process: building up, erasing, reworking and distorting – in order to deconstruct the landscape – which in turn becomes a metaphor for the process of painting itself.

Large blocks of colour and the layering of paint are dissolved with indents, distortions and suggestions from previous structure, forming a new landscape which bears faint witness to what came before it. Outlines which are hidden at certain points and exposed in others, make up the essence and intention of her work. This is the landscape on the brink of formation.

Multiform horizon lines, reoccurring motifs and structures offer hints, insights and sometimes multiple ways of reading the work. Simpson’s compositions are subtle and develop slowly, requiring contemplation and reconsideration as they progress and unfold in front of the viewer.

Freeman White’s landscapes are carefully observed studies of light and form which impress upon us the dramatic land forms of the Hawkes Bay area. White’s epic depictions of his local environment are powerful and emotional works which masterfully capture the enduring majesty of the land.

The land is often depicted in a state of late afternoon glow, capturing the subtle play of light and consequent shadow at the hight of summer, achieving remarkable depth, luminosity and grandeur. Endless ranges bathed in sunlight are contrasted with long, deep shadows which skillfully provide a visual flow for the viewer to move through. White’s landscapes are often intentionally sparsely populated with small clusters or even lone trees, allowing us to focus on the formation of the and muscular ranges. The trees which are depicted are often non-native, speaking of the cost at which settling into this area came and like may aspects of White’s work, explore post-colonial notions of beauty.

Complimenting the landform paintings is a powerful seascape work in which breaking waves are impressively rendered, providing visual and conceptual symmetry to the rolling hills, rugged cliff backdrops and valleys. White captures the drama and raw power of the waves effectively – a reminder of the constant pressures and influence the surrounding landscape is under. 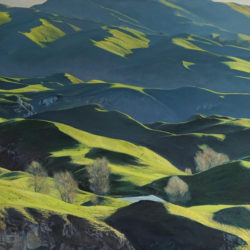 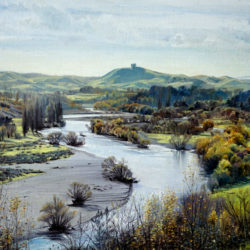 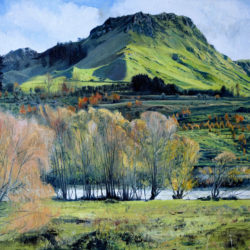 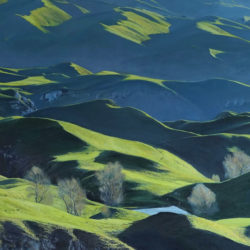 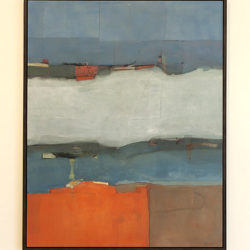 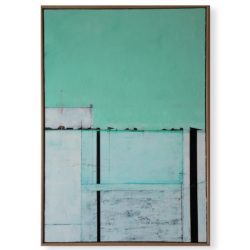 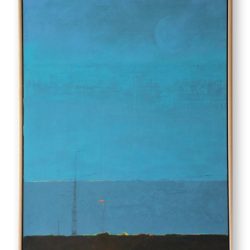 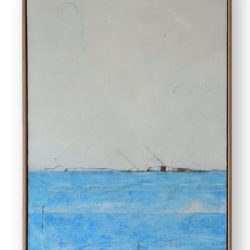 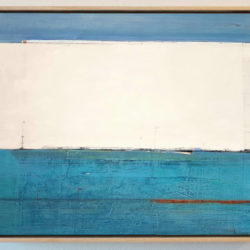