Island Nation recalls the themes of western symbolist painting, alongside the techniques and drama of the 18C Romantic painters. This new series of paintings presents a variety of isolated islands with a range of familiar local habitations. In each painting the oceans, structures, mood and time of day all vary, they are a string of atomised islands in flux, connected by the oceans which encompass them and the relentless course of history.

These quiet islands evoke mystery with their ambiguous narrative content, allowing the mood and atmosphere – along with the objects and structures within them – to speak directly to the viewer. This effect is nostalgic and deeply familiar, while retaining a sense of enigma and other-worldliness. Each painting leaves evidence of human occupation without any sign of the individuals who might inhabit these spaces which is where the intrigue and mystery lies; allowing these works to be seen as metaphor for personal journey – creating a window-like view to an inner world – a place for self-reflection.

It is notable in some of these new works, large pendant like objects are being suspended into the paintings from beyond the frame. These flat and sometimes graphic objects, on one hand seem at odds with the scale and sensual painterly handling of oil in the scenes below – yet they also function symbiotically, as if to suggest these isolated group of islands are part of a much larger story. 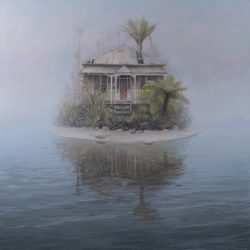 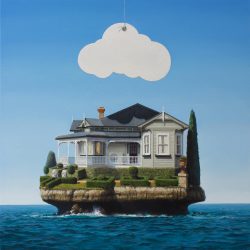 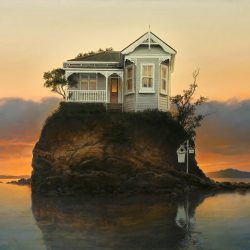 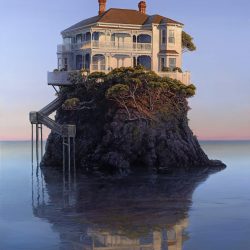 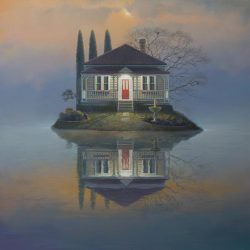 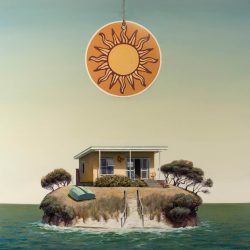 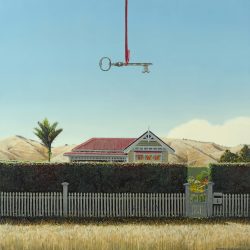 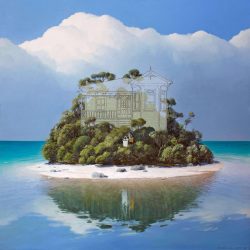