Known widely for his realist figurative land and ocean works – Lands Edge follows on from Smith’s popular 2017 exhibition (Archipelago) of ‘island paintings’ – which are gaining a momentum of their own and mark a turning point in the artist’s practice.

This latest series (Lands Edge) was born out of the artist’s visit to TiriTiri Matangi, a small island off Auckland’s coast, the home of a wildlife sanctuary and a restoration project to save our native fauna. In the last 30 years, hundreds of thousands of trees have been planted by volunteers and all predators have been removed. There have been 12 bird and reptile species translocated onto the island as well as the many different varieties that have made their own way there. The trip inspired Smith to join the Pestfree 2050 project – a hands on project which involves walking through the bush laying traps, to eradicate all animals deemed pests.

Despite the artist’s commitment to protect defenceless native species, Smith is conflicted in his undertaking: “Possums and rabbits are simply struggling for their own existence and hold no responsibility for being relocated. All of these ‘pest’ animals were introduced by our ancestors, and they adapted quickly – to the detriment of the native birds, insects and fauna. Trying to balance the scales and put right the mistakes of descendants has lead me to create these images as ethical sounding boards, attempt to convince myself that the killing of one species is validated, for the betterment of another species”

These new paintings are described by the artist as ”nostalgic visions of an imagined future, where we live in harmony with our environment and the life surrounding us; yet the tide still rises”  They are unashamedly of the Romantic movement, employing romanticism as a weapon for environmentalism. One painting in particular refers to the flow of time (with a quirky nod to the 1960’s classic movie Time Machine) – it’s relentless forward motion – and to the very real possibility of returning extinct native wildlife back to the land of the living.

Lands Edge presents the precipice on which we all perch, between the impenetrable forests and the endless ocean. There is wildlife here, birds and insects and marine-life, made strange by their size. But few birds have taken to the air, for there isn’t anywhere left to go. Most, like the solitary villas, are silent watchers – waiting for their restoration. 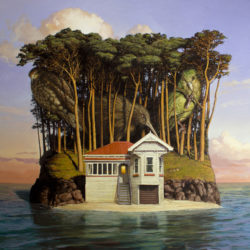 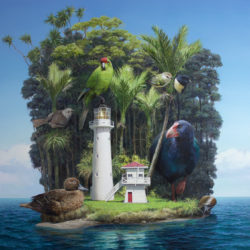 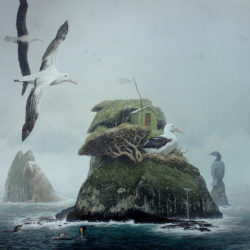 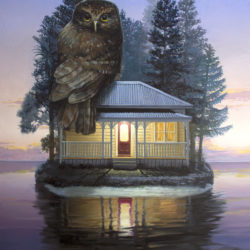 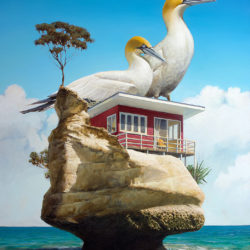 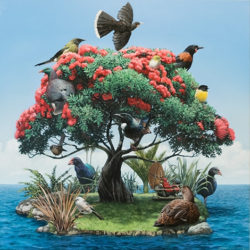 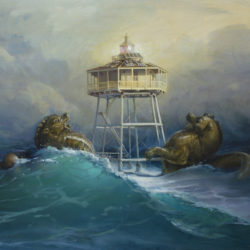 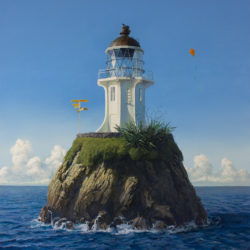