“When I was a young boy I had an ordinary experience which profoundly influenced me. I participated in a father and son possum bust; a night-time culling on a local farm to curb the invasive possum population. Each son, with his father beside him and spotlighted by over a dozen torches and onlookers, had the opportunity of shooting a possum out of a tree. When my turn came, I raised the gun so that the possum was within my sights.. but couldn’t pull the trigger, I instinctively knew that I’d gain no pleasure from the act of killing this small furry creature. My long walk back to the car, with bonded families surrounding me, was full of shame (and also with some gratitude that my father didn’t comment upon my perceived shortcoming).

Since that early experience I have learnt and understood more of the issue of invasive introduced species decimating the indigenous native flora and fauna. The damage they inflict upon native leaves, flowers, leaf buds, fruit, eggs, birds, insects and snails.  I learnt also of the quiet struggle for resources and displacement of our native wildlife for agriculture and suburban sprawl. As the world becomes smaller, the need for a home for each one of us (animal as well as man) becomes intensified. It is a battle for survival for the native population and I have chosen a side.

The early experience and empathy felt for that lone possum illuminated far up in the branches of that tree, means that I take no pleasure in my service, the introduced animals which have been deemed ‘pest’ were brought here by your forefathers and mine. It is a grim task, but a necessary one. I joined a local community of dedicated people trying to even the battle, every few weeks I go out, check my traps and rebait the stations.

These paintings are about value and nurture, they are portraits of ambition, failure and ultimately hopefulness. Although the characters are mostly the endangered native birds of New Zealand, the scenarios aren’t didactic, but rather are representations of a cast of characters striving to do better, to be better, to have more and to be more. Within the works are biblical struggles of balance and fragility, ideas of dislocation and migration – the balance between our need for development and growth and the birds same needs.

In some of the works, the depicted birds are literally migrating across the painted panel. They are depicted as moving away from the aesthetic of traditional oil painting and into the flat artificial plane of an acrylic painted blend. This mixture of media (Oil on flat plains of Acrylic) is a technique I implemented to signify the discord between the old to the new; the threat of loss from the real and organic into a dream state, a whimsy but also an aspiration for a better life.” 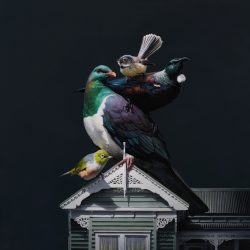 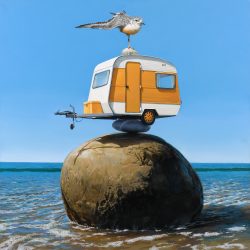 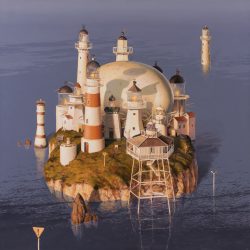 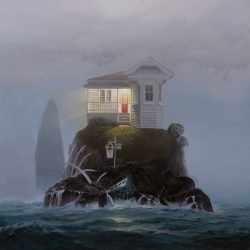 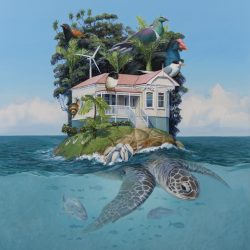 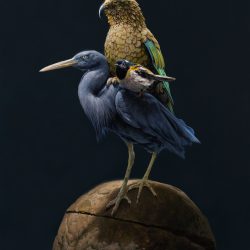 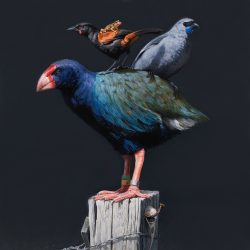 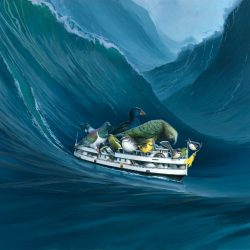 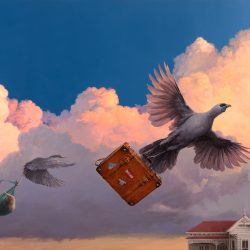 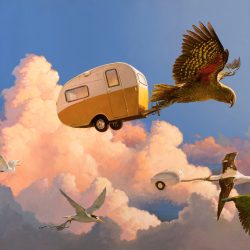